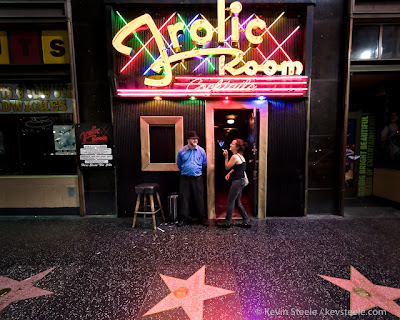 January 15th (Sunday) will mark the sixty-fifth anniversary of the internationally known "Black Dahlia Murder." If you are not familiar with this dark chapter of our city's history, details and theories can be found elsewhere on the internet. Simply put, in 1947, the body of Elizabeth Short was found in two pieces in a vacant lot, bisected at the waist. No killer was ever caught, and the case is still unsolved. This event was so bizarre and disturbing (even by today's standards), that it has almost become a symbol of L.A.'s shadowy underbelly that co-exists with our sunny skies. A cottage industry has even developed for the morbidly curious, from books to movies, and from tours to merchandise. There is even a drink named after her (which is best enjoyed when divided between two separate glasses).

"Officially" the last time she was seen alive was at the (haunted) Biltmore Hotel, downtown, on January 9th, prompting some to call those missing days in between the "lost week." However, during the investigation of this highly-publicized case, police did track down eye-witnesses that where able to fill in some of these gaps. Although, those who academically study this stuff argue about the legitimacy of these sightings, one account by John Jiroudek who had known Elizabeth Short, claimed she was in a 1937 Ford Sedan on Hollywood Blvd with an unknown blonde woman behind the wheel on January 13th.

So, in honor of the "city of angel's" most famous/infamous fallen angel, GHOULA is also headed to Hollywood Blvd this 13th (65 year to the day) to one of the Dahlia's favorite watering holes, The Frolic Room (AKA "Bob's Frolic Room"), established in 1934 on the ground floor of the Pantages Theater (built in 1930), replacing Halgreen's Fountain Cafe.

Daniel Jackson, a private detective, who had a chance meeting with Elizabeth Short in the Frolic Room a year before her death, was supposedly told by police investigators “We do know it to be a fact that Beth Short was in that cocktail bar and around that locality numerous times just before her murder.” What makes her preference for this particular dive even more interesting is that (according to "The Story of Hollywood" by Gregory Paul Williams) in the post Second World War years, the Frolic Room had become one of Hollywood's secret gay bars. Was the Frolic Room the destination for Beth and her blonde "companion" that day?

In the years after her death, Ms. Short has been accused of being many things, a prostitute, a burlesque dancer, a drug addict, and yes, even a lesbian. At this point, no one really knows if any of those labels are true. However, among the 25 serious suspects listed by the District Attorney was the cryptic entry, "Queer Woman Surgeon." It was thought at the time that perhaps a woman cut the body in half to make it easier to transport. A few women even confessed to the police. Did the Dahlia meet her murderer, or rather murderess, here?

Unfortunately, the male ghost of this tiny tavern doesn't provide any clues to this mystery, or does it? Although the management claims no knowledge of any ghost stories connected to this historic bar, patrons have told GHOULA about a "man" that is only seen in the reflection of the mirror behind the bar (and not present in the actual room). Curiously, this phenomena also occurred in the bar in the Biltmore (until they removed the mirrors). Does the same spirit haunt both of these places linked to the Black Dahlia's final days? Was "he" stalking her?

Additionally, the Pantages building with its ominous hooded statues along the roof, in which the Frolic Room resides, is famously haunted. The historical marker on the street light in front even references the ghost of Howard Hughes, who is one of the spirits said to haunt this building, (along with a female spirit, and a singer). Hughes purchased the building in 1949, and moved into the offices upstairs. It is said that during his time as owner/occupant, and true to his obsessive-compulsive nature, he micro-managed the Frolic Room, and installed the iconic Technicolor (almost psychedelic) neon sign in front. Hughes also brought the Academy Awards ceremony to the Pantages, and supposedly would convert the Frolic Room into his own private lounge on Oscar nights. Who knows, maybe the male spirit in the bar is him (back when the seeds of his insanity were surfacing).

Lastly, there was a 1950's TV anthology program entitled "Screen Director's Playhouse." One episode featured a story about a lonely older man, watching the Academy Awards broadcast live from the Pantages Theater on the TV in the Frolic Room (next door). Unbeknownst to the other patrons, the film pioneer mentioned in an acceptance speech is ironically that sad, poor elderly man. This fictional story is clearly based on film pioneer, D.W. Griffith. Although, he had died by the time the Oscars came to the Pantages, he had spent much of the later part of his life, forgotten and destitute, in bars like the Frolic Room. Could he be the "man" in the mirror?

So, come out and raise a glass to the three victims of the "Boulevard of Broken Dreams," the Black Dahlia, Howard Hughes, and D.W. Griffth, and hear some of the other ghost stories about the building and street outside this 13th... if you dare. 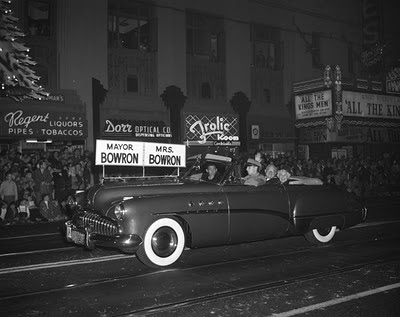 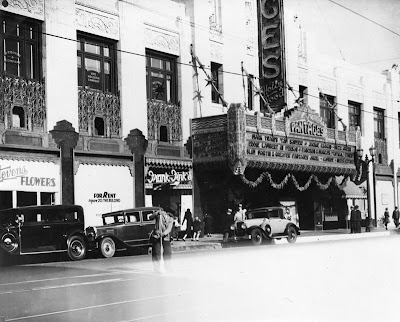