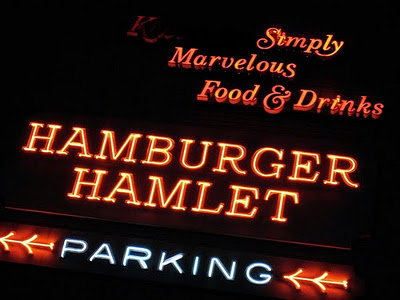 NOTE: This historic Hollywood landmark will be closing its doors forever next month. This may be your last chance to enjoy it before it leaves us.

"To sleep, perchance to dream - Ay, there's the rub."
William Shakespeare (from Hamlet)

"Hamburger Hamlet" was the dream of actor, Harry Lewis (most famous for his role in the Bogart/Bacall classic Key Largo). He was out of work, when he confessed this aspiration to his future wife, Marilyn, an aspiring fashion designer (and future creator of Cardinali collection), on their first date. He wanted a little place for actors to hang out. He figured that since every actor dreams of playing Hamlet, they would appreciate a burger joint themed towards that theatrical character. The concept for the menu was to mix signature burgers with some "fancy items," to attract both sets, because even the wealthy enjoy comfort food.

From the very beginning the tiny Hamlet was a hit. Marilyn and Harry were the only two employees (she cooked and he worked the front of house). The place got so busy, that a PA system was installed so that she could announce the orders that were ready, and the individuals could pick them up themselves. Celebrities, not wanting there name announced, would give "Smith," which led to confusion most nights when all orders were for "Smith." When, Marilyn gave birth to their first child, forcing the couple to leave the restaurant, regular customers, Sammy Davis Jr. And Tony Curtis, took over the cooking and front of house duties, while the Lewis' were in the hospital.

From this beloved hole-in-the-wall, Marilyn and Harry built an empire, and a chain of Hamburger Hamlet restaurants across the country, even spinning off a more upscale version called The Hamlet Gardens. Additionally, they opened Kate Mantilini's, which did for meatloaf, what the Hamlet did for burgers (and which is also rumored to be haunted).

By the end of the 1960's, the original restaurant moved a couple of blocks west to its current location inside the modernist high-rise enclave at the Beverly Hills border (on the other side of "The Long Hair Curtain"), where the decor was changed to match the library/reading room aesthetic established by the other Hamlets. Over the decades, this site has became a hub for Hollywood deal-making, as it seems this is the last restaurant, from the studios, one passes before entering the residential neighborhoods of Beverly Hills (where these deal-makers live).

Despite a claim made by Medium Dorothy Vellas to the L.A. Times that the conditions at the Hamlet are no good for contacting the spirits (too crowded), employees claim that there is spirit activity in the kitchen after hours. It is said that when everyone has left, and they are closing, clattering sounds come from the kitchen area as if someone is busy at work. When investigated, no one is ever there.

Could this be a former employee? A former cook? In 1974, a disgruntled ex-cook trainee, returned to the restaurant, hid inside it over night, and when the manager and a maintenance man arrived at 9am, shot them at close range with a sawed-off shotgun, killing the maintenance man instantly. Although this story has been repeated, those events happened at their other West Hollywood location. Did the ghosts of that event move here, when the other Hamlet closed?

During its first few years, the Hamlet didn't "come alive" until after midnight, when performers got off work. In these wee hours, Sammy Davis Jr. used to dance on the tabletops, after his gig at Ciro's (last month's haunted location). Does this late-night energy still rattle around at the Hamlet? Or, could it be a phantom from the restaurants that preceded the Hamlet at this address, Schwab's and Covey's. Little is known about what was at this site before this Paul R. Williams designed building went up in 1963.

Whoever haunts this hamburger place inspired by Shakespeare's most famous ghost story, may never be revealed, but at the very least we can toast this unknown ghost, and toast this local institution before it also drifts into eternity.

"Parting is such sweet sorrow..." 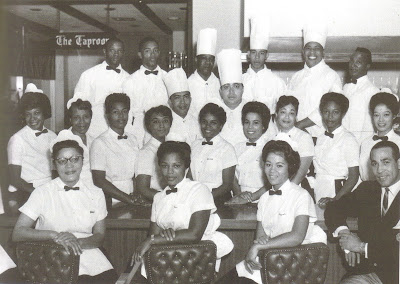 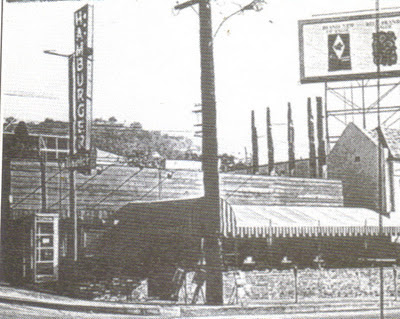 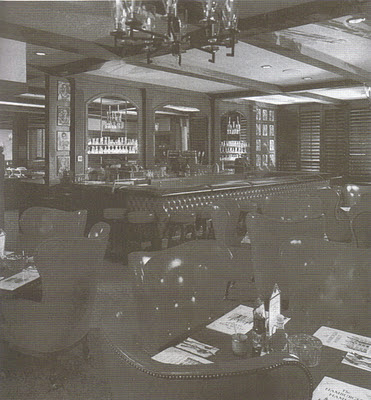