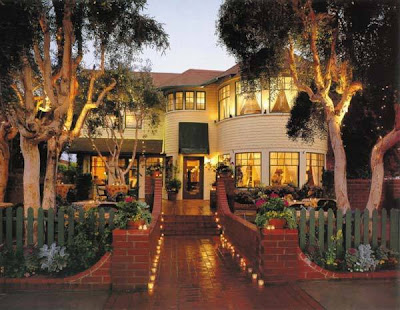 NOTE: There will be an important announcement concerning the future of GHOULA at this gathering.

THE GHOSTS:
There seems to be two kinds of haunted bars in Los Angeles. The kind that hides their haunted history, and the sort that celebrate their ghosts. Luckily for us, the "Basement Bar" hidden underneath "The Victorian" restaurant in Santa Monica is one of the latter. Not only do they love to talk about their ghosts, they even have a signature drink ("The Delia") named after their most seen spectre.

Before this Queen Anne style Victorian house, known locally as the "Kyte House," was converted into one of Santa Monica's swankiest restaurants, and before this historic home was moved from it's original location at 1003 Ocean Ave (on the corner of Ocean and Washington), it was the residence of Delia. This little old lady was the last caretaker of this stately abode, and little else is known about her. There is a story floating around that shortly after the restaurant opened (then called "The Chronicle"), Delia's relatives came by to find out if anyone there knew where Delia had moved to after the house moved. Whatever became of Delia is any one's guess, but what is agreed upon is that her spirit seems to have ended up at this new address. Sightings of her continue to this day, and have occurred all over the building. By all accounts this elderly phantom seems to be harmless, and minds her own business.

Then, there is the dark form of a man seen lurking in the shadows of this establishment. Nothing is really known about this figure or his connection to the structure, but one can speculate. According to the restaurant's website, the home was built in 1897, though other sources indicated 1900 or 1901. Either way, the then young port city of Santa Monica was a tough and sometimes dangerous place to live. Back then, Angelenos used to joke that passengers of the trolley lines that cut through Santa Monica should be blindfolded until they rode past. Raymond Chandler would eventually immortalize this darker side of this sunny city in his hard-nosed detective novels using the code name "Bay City." Could this shifty ghost be that of a criminal from a past era?

Or, could this restless male spirit be that of the house's original owner, Dr. George I. Kyte, whose obituary stated he was the "Master of the Southern California Masonic Lodge?' Did that secret society conduct secret ceremonies within this innocuous-looking building's walls? Were men in dark, hooded robes practicing possibly pagan rituals in the same rooms where diners eat today? For what its worth, it is also known that his wife's funeral was held inside this home, when those kind of practices were common. Could she actually be the old lady said to haunt this establishment?

Is there a better place to dwell upon these questions than the dark, spooky basement of a haunted Victorian mansion? So come out, have a drink, and maybe bump into a ghost at Santa Monica's Basement Bar... if you dare. 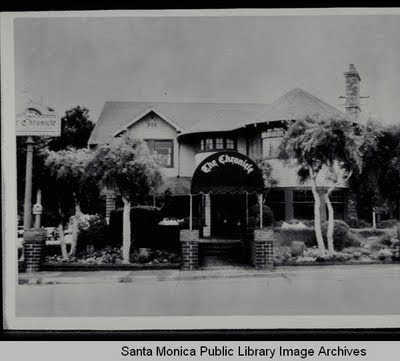