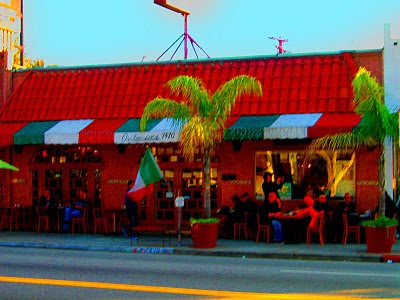 All those who attend will receive a free (square) G.H.O.U.L.A. button. If you already have one, please wear it so others can find you.

THE GHOST(S):
The arrival of a new year is usually a time to wish others good luck and prosperity in the coming year. So, it seems fitting that GHOULA kicks off 2011 with a lucky charm of a location. Antonio's on Melrose has, over the last fifty years, gotten a reputation as being the place that celebrities hang-out at just before they become famous (Tom Hanks, Julia Roberts, Jennifer Aniston, Jennifer Lopez, etc.) as if this magical Mexican restaurant had something to do with their good fortune.

This urban legend further states that these windfalls occur when the spirits that haunt this eatery favor an individual. Although, the idea these ghosts actually influence the destiny of the patrons seems far-fetched, there does seem to be something super-natural about this establishment. The lights have been known to turn on and off by themselves, a bell in the kitchen rings when there is no food for pick-up, and staff have even felt phantom tugs on their clothes as if some unseen "person" wants their attention. A male ghost has also been seen throughout the building (at the end of the bar, the office, back room, etc.)

When asking the owner, Antonio Gutierrez, who he thinks the ghost might be, he doesn't even venture a guess since it really could be anyone from the restaurant's history (from beloved staff to celebrity customers). Some have even speculated that ghost is ol' blues eyes, himself, Frank Sinatra, since he loved this place, and spent many nights there. Then again, it could also be the spirit of eccentric billionaire Howard Hughes, who ate at Antonio's so much (and spent so much time there) he had a phone installed (which is still there) next to his usual table. Gutierrez also was told when he moved in that when the building was under construction, the builders discovered several caskets in the ground at that site that dated back to when this area was under Mexican rule. Do these long gone Mexicans haunt this Mexican restaurant? Come to Antonio's and find out, and if you're lucky, the spirits might look favorably on you.

had a great time. thanks for the stories and background on Antonio's!