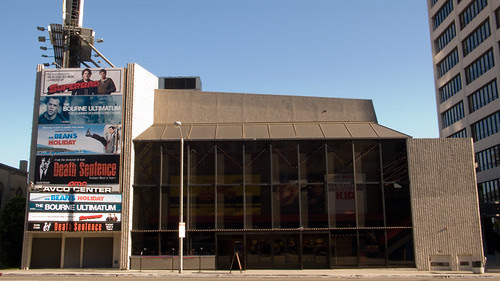 They say that the three most important factors in determining the value of real estate are, in no particular order, 1.) location, 2.) location, and 3.) location. Not so coincidentally, these same three factors might also be said to be important when figuring out what causes a certain building to be haunted. How else can one explain the numerous ghost stories that are connected to the AMC Avco Cinema? All the typical ecto-explanations seem to not apply to this unique establishment. There is nothing particularly spooky about the sleek exterior design of this modern theater. The building is relatively not very old.

Additionally, there does not seem to be any dark or tragic history connected to this business. This cinema simply opened in 1972 as a three theater complex (two smaller screens complementing one large screen) as part of the Avco Center which included the office building next door. It was the first movie theater in Los Angeles to have a THX (multiple-speaker) sound system installed, which was a great novelty at the time. Although, attempts had been made in the past to create "surround sound" (like the 1941 Fanta-Sound system), it wasn't until THX (heard here first) that audiences started to demand better sound quality in other theaters. As you can see, these are not the kind of notes that make for the beginnings of a good ghost story.

Yet, the tales of harmless spirits residing in this cinema continue. So, is the location (or placement) of this state of the art theater the key to understanding its ghostly lore? This seemingly innocent building does sit on one of the more surreal pieces of real estate in Westwood, sandwiched between two more typically spirit-related businesses. It has a church (where funerals are held) on one side (to the East) and a cemetery directly behind it, on its South side. It is also worth mentioning that this adjacent grave yard, which is only few feet away from the movie screens, is the final resting place of Heather O'Rourke, the blond-haired ("they're heeerree!") girl from the "Poltergeist" movies, and some say the victim of the "Poltergeist Curse." Richard Conti is also buried there with a grave that reads "Richard Conti, 1900- ?" Additionally, this cemetery has the tomb of film-icon, Marilyn Monroe, who is said to haunt these neighboring grounds. Could the proximity of this theater to all of that death be the reason ghosts have been seen inside its walls?

Employees (who wish to remain anonymous) claim that theater #4, which was originally the balcony to the large theater, is where most of the paranormal activity occurs. In addition to the uncomfortable feeling that you are being watched when you enter this room, cleaning crews claim to have witnessed phantom people walking along the aisles and seats. There is also a mysterious force that occasionally causes the curtains covering that screen to inexplicably unfurl with a rolling wave-like motion as if being blown by a strong wind that just isn't there.

Although, theater #4 seems to be the real hot spot (or more likely the "cold spot") for most the super-natural doings, there is one other apparition residing on these premises. Eerily, "she" is also associated with the upper level of this building. Some say a little girl has been seen coming slowly down the stairway in the lobby (near the box office on Whilshire Blvd.) only to vanish as she reaches the bottom step. Is there a reason the ghosts here seem to have issues with the ground floor?

Unfortunately, the identity of these cinephile spirits, as well as any reasons they have for attaching themselves to this theater is, as of yet, unknown. Did they (in life) have a deep connection to this contemporary cinema, or are they (like the living) strolling in off of the street (or neighboring properties) to check out the latest films? Which brings us back to our original question, is this theater's location the answer? Is it just simply a conveniently placed source of entertainment for all those restless spirits next door? Given the high number of people from the entertainment industry buried a few feet away, this seems to be the most likely (and only) explanation as to why so many mysterious manifestations. In the end, it simply boils down to location, location, and looooooooocation!


If you know of another ghost story (or another version of a story mentioned), or if you have personally experienced something strange at this theater, please leave a comment.

(to read about another haunted theater in the L.A. area...)

I used to be a manager at the Avco 4 and due to the fact that we were hearing reports of activity from the employees..I agreed to do something stupid. We conducted a Ouija board session that I videotaped. We did this on at least two occasions. One instance that still haunts me to this day occurred in the projection booth of #4. Unfortunately, I don't have this event on tape. Three employees asked a question via the Ouija board and immediately after, we heard a loud moaning just outside the door leading to the staircase. The employees that were in the room clutched each other with a look of horror on their faces. We looked towards the door and saw a shadow pass from the crack underneath the door. We ran out the other staircase by booth # 3...completely freaked out. I will never forget it.