Excerpts from Inland ghost hunters find the paranormal -- or the simply normal
by Gregor McGavin of The Press-Enterprise: 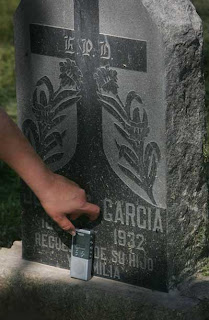 The grave was marked only by a splintered wooden cross jutting from the weedy grass of Colton's Agua Mansa Pioneer Cemetery.

No name, no headstone. Just two lengths of weathered wood bound by a bolt.

"No one knows your name," K.D. Foreman said from the graveside on a recent morning. "Is there anything you'd like to say?"

There was no reply from that resting place, nor from a dozen others throughout the cemetery. But that's sometimes the case for Foreman and the other members of the Inland Empire Paranormal Investigators.

Much of their work comes later, when the amateur ghost hunters painstakingly analyze the audio, visual and electromagnetic recordings they gather on their outings.

The Inland group is one of dozens throughout Southern California and hundreds -- if not more -- nationwide, enthusiasts estimate. The 70 or so members met online beginning a year ago and have visited private homes, historic landmarks and graveyards throughout Riverside and San Bernardino counties. They arrive armed with digital cameras and television remote-size devices they say capture electromagnetic fields and sounds undetectable by the naked ear. Investigations take place weekly, said Foreman, the 43-year-old substitute teacher who organized the group and serves as its leader.

"It's a hobby and a calling," said Foreman, who says she started having visions of future events at age 10. Similarly prophetic dreams started two years later, Foreman claims, when she foresaw her brother in a car accident on his way to a concert.

Foreman says that the spirit of an old man she believes is the former occupant haunts her Yucaipa home. He turns the television on full blast in the night and makes her golden retriever growl.

Peaches Veatch, 34, a mortgage loan consultant from Riverside, says her introduction to the supernatural came at age 10. Her godfather, who had died several years earlier, appeared in her bedroom late one night. She says he was sitting in a chair in the corner -- a chair that did not exist. His image disappeared seconds later.

"Why he appeared to me, I don't know," Veatch said.

The Inland group gathered on a recent weekend for a midday visit to Agua Mansa. The site sits on a few acres of sloping hillside a stone's throw from the Santa Ana River, in an industrial stretch of Colton.

The cemetery, established in the 1850s, has been home to many supposed ghost sightings. Motorists on the winding, two-lane road out front have claimed to see an old man walking his dog. In some accounts, both disappear moments later; in others, they seem to walk straight through the gates.

Inside, pepper trees shaded crumbling headstones and broken crosses. Some graves were half-hidden by weeds and grass; others were not marked at all.

"Peaches, come over here and tell me if you sense anything," Foreman called out at one point.

"I sense they just cut the grass," Veatch said.

At another grave, Veatch said her head began to buzz, as though she was standing beneath power lines.

"We sense a spirit here -- could you light up this meter?" Foreman asked.

"Nothing," Foreman declared a minute later.

The investigation was over after an hour.

A few days later, the group sent some audio recordings to an observer of the investigation. Some were indecipherable; others sounded like the wind. On one of the more promising files, a brief whisper could be heard after an investigator asked for a response from one of the graves.

It turned out to be the observer muttering under his breath after accidentally rustling his notebook.

i dont know why you guys didnt get anything when you went there.i got plenty.the one you were askin about the cross.he wants to know why he was murdered.and the guy with the dog.hes gonna stay there until people slow down.hes not gonna go away.you also missed an entity.there is a indian hiding in the brush by the gates.and about the woman.please.shes not htere shes up the street.

The word "Amateur" shouts at me. Not only that, did they get permission to do this at this Catholic cemetery?

What does it matter if it's a Catholic cemetary or not?

I am 64 years old now and grew up in Colton. Auga Mansa Cemetery has been haunted for as long as I can remember. Haunted by a Woman said to be looking for her daughter. Seen in the cemetery and on Agua Mansa Road. I and three others saw her on the road back in about 1962. Something I'll will never forget. Our car quit about a mile away from where we saw her. A Highway Patrolman pulled over to see why we were stopped on the road, and when we told him what we saw he left like a bullet. I've never heard of the man and dog story. I moved to Colorado in 2006 so I haven't been around since then. I have a News Paper article from 1971 about the ghost woman and some guy who did a seance in the cemetery. It was said by town folk when growing up that if you saw the woman in the cemetery you would die soon after. It was noted in the paper that the man doing the seance had died shortly after. Kids from Colton High School would go there for fun. Those who claimed to see the woman would say their car would not start if see was visible. Greig Johnson

I saw the old man and his dog. The dog was like a small terrier, kinda shaggy, and the man was walking him on a leash. I always took that curve fast, because I liked fast cars and since I lived in the house on Agua Mansa Rd and Rancho Ave, the white two story house, looks like a farm house, I took that road alot and was used to going around the curve there by the cemetary alot. Each time I saw the both of them, I was taking the curve fast. I think he was run over by someone by accident, or whatever and maybe they did not see him and his dog until too late. The first time I saw them, it was midnight, and I couldn't believe that a man was walking that road at that time of night being that old and with only his little dog as his only means of protection at that spot that night, or shall I say morning? I then thought "wow, and luckily they were both all white, so, that was a wise man too!"
It never did occur to me that they were dead and that the man was just trying to show people to slow down or wear white while your walking on a dark street such as Agua Mansa Rd. The second time I came flying around that same corner, and saw him and his dog, w he had just reached the other side of the road, I look in my rear view and he wasn't there. And I stopped to think about what I saw, and I remembered the first time I saw them....I knew he was a ghost. That encounter made me slow down for that curve next time. Then he never was seen by me again.

My Buddies and I We're also going around the Sharp turn on auga mansa and I seen that old man and the dog just as you explained it we stopped and backed up and he and the dog disappeared this was about 10:30 11 at night. We looked for him there was nowhere for him to go they just disappeared this is the first time I heard anybody else seen him this happen earlyI 90s crazy. 4/16/2013

I have been there a few times just to check it out didn't sense or see anything. It was very quiet and peaceful I would love to learn about the people buried there

Mr. Carradine is also the author of "The Park After Dark: An Unauthorized Guide to the Happiest (Most Haunted) Place on Earth" and other ghost guide books