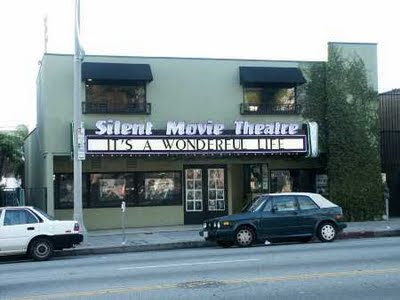 In 1942, this art-deco theater opened its doors, and became the first (and only) venue dedicated solely to the preservation and presentation of "silent" films. For many decades, this was the only place in the world where one could see many of these forgotten relics on the big screen with live musical accompaniment as they were originally meant to be seen. Thus, this little building became a destination for true film buffs. However, among horror movies fans, the Silent Movie Theater is famous for another reason. It is known as the place that inspired one of the great moments of cinema history. Movie makers have tried to create truly interactive experiences to thrill their audiences, going back to 1909, when men were employed to rock the theater’s seats to correspond with the projected images aboard trains. Fifty years later, William Castle, took that idea one step further in THE TINGLER and famously wired theater seats to shock the audience during its climactic scene that takes place in a theater based on Los Angeles’s quirky Silent Movie Theater.

Today, patrons can experience a whole new level of interactivity when entering the door of this historic venue for silent films. The lobby is said to be haunted. A crimson-red blood stain has been known to appear and disappear in the approximate spot where a former owner, Laurence Austin, was gunned down by a hired hit man. Mr. Austin's ghost has also been seen (after hours) loitering in the lobby by employees over the years. It is also believed that the projection booth is also haunted by the ghost of the former projectionist (Austin’s lover) who contracted the killing. Although, its quite possible that this second ghost is John Hampton (the original owner), since he too has been seen roaming the second floor, where he once lived (not unlike the characters in the "Tingler"). Regardless, the whole scandalous affair between Austin and the former projectionist has forever psychically scared this theater. So,... are the tingling shivers one feels down one’s spine while seated in this eerie theater real or just mechanized movie magic? Go there and find out for yourself.

If you know of another ghost story (or another version of a story mentioned), or if you have personally experienced something strange at this theater, please leave a comment.

(to read about another haunted theater in the L.A. area...)

that link no longer works, go to www.cinefamily.org