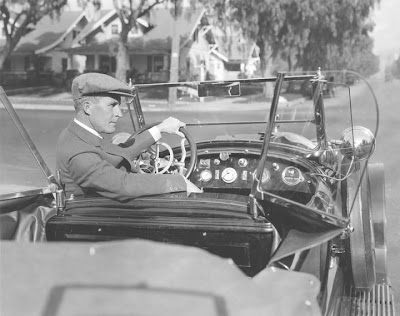 If you are up for the challenge, come be a part of history, and solve Los Angeles' first high-profile, unsolved murder. February 1, 2012, will be the 90th anniversary of the death of silent film director, William Desmond Taylor. To mark the occasion, GHOULA is asking the local ghost-hunting community to try to shed new light on this cold case.

1.) In the days leading up to the anniversary, we invite paranormal investigators to investigate the crime scene, the North-Eastern section of the parking lot at 420 South Avarado Street (map), adjacent to Maryland Street, the site of his former home. Hopefully your skills will uncover a new piece of information to add to the discussion, or perhaps even the solution to this historic whodunit.

2.) On the actual day of his Murder (Wednesday, 2-1-12), come and meet-up at 8PM, at the 1920's bar, The Prince, 3198 1/2 W. 7th Street at Catalina Street (look for someone with a square GHOULA button), toast this forgotten film pioneer, and share any evidence you have gathered (proper names, odd words, locations of disturbances, etc.) with people familiar with the nuances of this complicated case (or just come and socialize). The bar is also a few doors down from one of the only buildings connected to the murder that hasn't been torn down to make a parking lot.

25 years before the murdered body of "The Black Dahlia" was found naked in a vacant lot, the country had their eyes on LA, and on the newpaper headlines concerning another strange murder case, involving one of Hollywood's top directors. On the morning of February 2, 1922, William Desmond Taylor's body was found, face down, in his Bungalow (formerly 404-B South Alvarado Street), apparently shot in the back the night before. No cash or anything of monetary value was stolen, but it is said that when the police arrived that morning, studio executives and one of his leading ladies were stepping over the body, tearing the place apart, and burning documents. What they were looking for, or what they destroyed is still a mystery.

Like the Dahlia case, there are easily a dozen prime suspects (including his valet, who may have been his brother secretly pretending to be his employee), and scholars and historians still debate aspects of this case. Over the decades, wild theories incorporating sex scandals, drug use, secret identities, and disguises have also surfaced. Was it even really William Desmond Taylor's body?

Because of the crime-scene contamination, the case is still unsolved, and probably unsolvable... until now.

Those ghost-hunters that investigate the site, but can not come to the meet-up, please email GHOULA with your results, so we can discuss them that night. Thank you.

For info about the bar...

(below is a diagram of the original layout of the parking lot.) 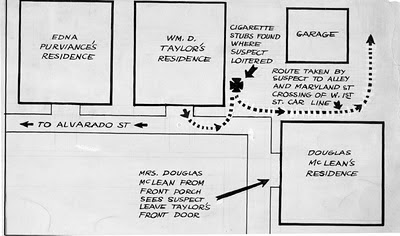 Some people think that William Desmond Taylor is a RESTLESS SPIRIT http://looking-for-mabel.webs.com/restlessspirits.htm

I always thought Mary Miles Minter's or her mother had killed him. Be fun to see what you came up with. Wish I didn't just find this post. I would have enjoyed this.