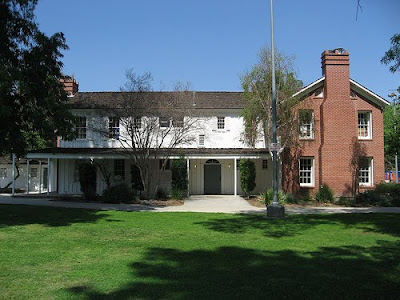 NOTE: Our group will have access to the interior of this haunted house til 9pm.

Come out for this year's last free outdoor screening tomorrow (Friday, 0ct 28, @8:00pm) and see "The Haunted House" with Buster Keaton at this real haunted house like the one in the movie. (For more info about the movie... ) Also, hear about this local landmark's history (and ghost stories).
All are welcome to this family-friendly event. Don't forget to bring chairs and flashlights. Also, the haunted house is now in the middle of a city park, so please follow all posted rules while in the park.

Like a scene straight out of the movie Poltergeist, in the middle of rows of 1960's era suburban neighborhoods, sits an 1860's haunted house. This spot, deep in the San Fernando Valley, was also the original site of on a Native American village (like in Poltergeist). And as if that weren't enough, the home is haunted by a little girl (also like Poltergeist).

The village mentioned above was home to the Chumash tribe that chose this land because of a fresh water spring nearby. The Chumash word for "water" is "canoga," hence the modern day name for this area, "Canoga Park." These waters also brought visitors, who traveled along the El Camino Real (Royal Road) to and from the San Fernando Mission.

Then in 1854, this region (and the west half of the valley) was sold by Andres Pico to Issac Lankershim, and it was converted into farms. In 1869, Alfred Workman, who managed the 13,ooo acres of wheat on the western edge of the property, was granted permission to build a house for himself and his bride on this spot. After falling into disrepair at the turn of the century, it was purchased by the screen-writing (husband and wife) team of Colin and Florence Clements. They restored the house, and held many parties on the property that were attended to by the movie stars of the day. The screenplay for The Wizard of Oz was even written within its walls. It was during these times that the home was nicknamed "Shadow Ranch." Despite the ominous title, the moniker was chosen because of the huge eucalyptus trees surrounding the house for shade (planted on Workman's wedding day). After the Clements, the Paulls family raised 13 children in this house. Then, in 1957, the city obtained the property to use as a community center, and in 1962, Shadow Ranch became one of the first ten places chosen by the City of Los Angeles as a Cultural Historical Monument (it's #9).

Now, for the ghosts... As mentioned above, there is a little girl seen walking around the house, and following staff members. It is said that she likes to play in the house after hours, and when employees stay late, she tugs on their arm to remind them its time to leave so she can have the house to herself. There is a little boy on the second floor, who is seen (from outside) looking out of the upstairs windows. According to local legend, he died in an accident and was decapitated. There is a woman in a white Victorian dress, who walks through visitors of the house, and of course the ghost of Alfred Workman is said to haunt the house.

Interestingly enough, spirit sighting in this structure go back many decades. A cook for one of the families that lived in the home stated that he believed a ghost occupied a small hall next to the garage.

Also, in the 1970's, the Valley's chapter of the Society for Psychophysiological Research (SPR) held their monthly meetings in this building where experts were invited to give lectures on various aspects of the occult to their membership. More recently, GHOULA was told by staff that not a Halloween goes by without paranormal investigation teams and Ouija clubs requesting access to the house for late night activities and experiments.

Lastly, like most historic properties in Southern California, there are claims that 25,000 dollars worth of gold was buried on the property (somewhere near the house) by a group of bandits, who robbed a Wells Fargo stage coach on the nearby Santa Susanna Pass. While the Clements lived here, they complained that people were always digging up their lawn at night looking for the treasure. Other versions of the story, connect the notorious Joaquin Murrieta to the lost gold, who (like the little boy who haunts the house) also was decapitated after death. Coincidence? 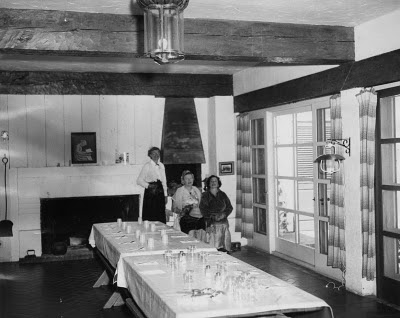 I think the Paull family may have some impact on haunting. Here's part of what I've written in past:

As for history, there are lots written, some taken for fact that is not. Alfred Workman build house and had a working ranch. Workman was an English immigrant, not Australian as some claim. He is credited with introducing Blue Gum Eucalyptus trees to Southern California, maybe, maybe not. http://www.signonsandiego.com/uniontrib/20080831/news_lz1mc31wewere.html

On to what I found quite interesting, Workman sold property to Paull family. Little is written on their live at ranch. In 1933 Paull sold property, moving to 10 acres either next door or around the north-west edge of current park. Addresses have changed since those days.

In 1936 tragedy struck Paull family. The family included Willard and Bessie Paull, their 13 children and Williams’ parents. At age of 53 Willard passed from pneumonia on March 8. On day of his funeral both is parents were taken to hospital due to pneumonia brought on by influenza. 73 year old Mrs Paull died on March 11 and 79 year old William Paull died March 13. During double funeral Bessie Paull, 43, collapsed and died.

They were all interned at Oakwood Cemetery in Chatsworth, CA. An uncle farmed out some of the children (which included 3 month old twins) and eldest daughter, about 16, cared for rest.